I am now single finger typing this whole blog for the next few days, downgraded from iPad to iPhone, late at night and tired as hell. Spelling and grammar are about to get ugly. No judgement.

We only had a short time this morning to do what we wanted before it was pick up time. I chose to go for a walk around Steve and Linda’s place while the other two went back out for a short kayak. Here’s my award winning shot: 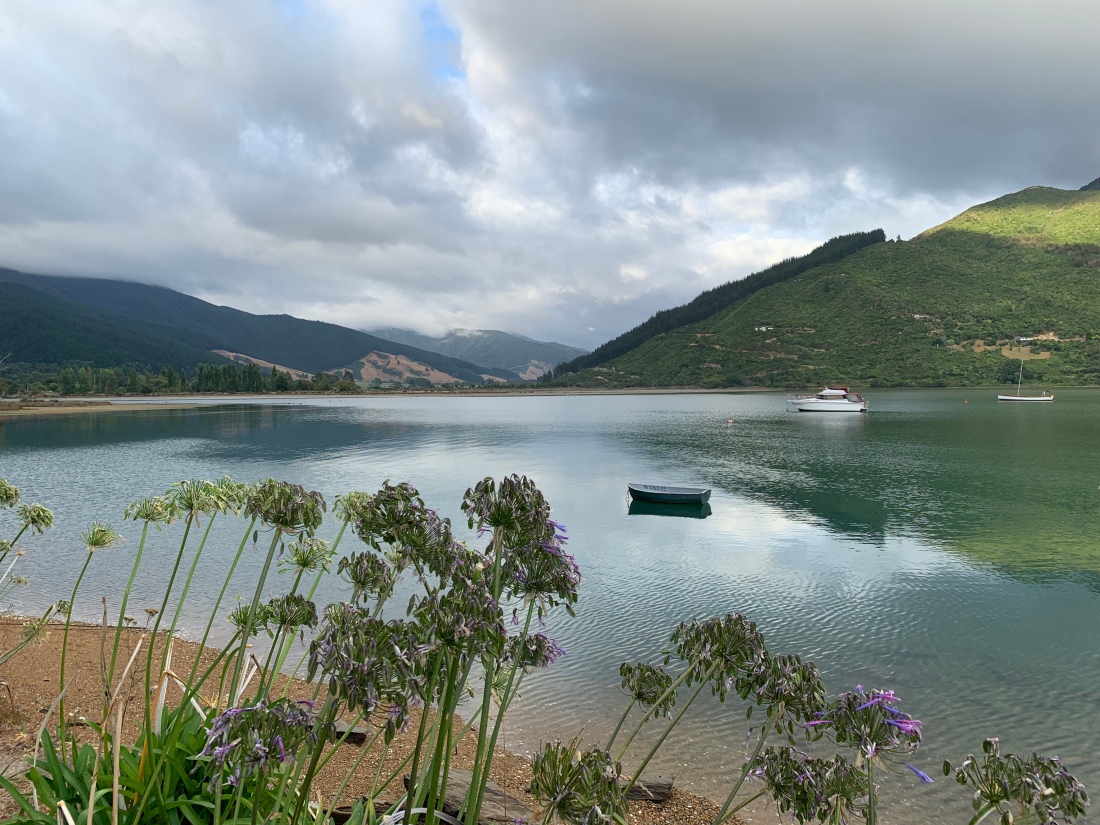 Our plan was to work out as hard as we could in the short time we had. We needed to sweat as much as possible so we three could hold our own against the stench that was coming ahead from those seven.

Our driver, Aaron, brought us to a well known bakery where we had all of three minutes to pick up lunch and get back on the road. We were meeting up with Ernie in a few hours and couldn’t be late.

I wanted to try local grub so followed Aaron’s lead and got a “Minced Pie”. (Sorry for not knowing what it is folks. I skipped all the hand pies when I was in England and stuck to Indian Food). I was told it’s beef and cheese. When I asked what kind of cheese ( I don’t eat Blue, Gorgonzola, Brie, and other stinky stuff so it was a valid question) I was told both by Aaron and the woman clerk, “Just regular cheese”. Well that clears it right up! “Sorry, I don’t know what regular cheese is here” I said.” Just the regular ole plain kind!” said Aaron a bit annoyed with me. “The usual, everyday cheese!” the woman told me confused by my confusion . I ordered the pie and we had to go.

Everyone really loved these pies and Borut said they kicked the pies in London to hell. Tasty, yes, but too heavy and greasy for me. I figured minced meat would be minced into small pieces. This was more like creamed beef with no texture . I don’t need another one for at least 10 years. By then I’ll have worked this one off and I’ll try the Curried Chicken one they were out of here.

The drive up to meet our crew was so picturesque. We left the sounds and traveled into the wine country then to the forest. We arrived at a lake and waited for them there. We got eaten by sand flies who apparently LOVE Deet. If we kept moving we were ok but couldn’t stop for anything. I got my steps in just fine today because we had to wait an hour for them.

And there was Ernie driving up! It felt so much longer than three days since we saw them. And man were they grungy! Hubby chased me around and around Ernie for a kiss hello but no way was I getting close to that without a shower! Uh uh! Love has limits.

The Hikers have lots of great stories but I’m going to let Hubby write the blog to describe it all. The only problem is that we are constantly on the move so making the time to write is difficult. He’s not the die hard blogger that I am grabbing time to write on my phone in short segments here and there.

We had a long drive to get to our next destination called Pancake Rocks. The beauty here is overwhelming.

We drove most of the day with stops for short hikes, then checked into our cabins. These were actually very nice on The inside with incredible views. 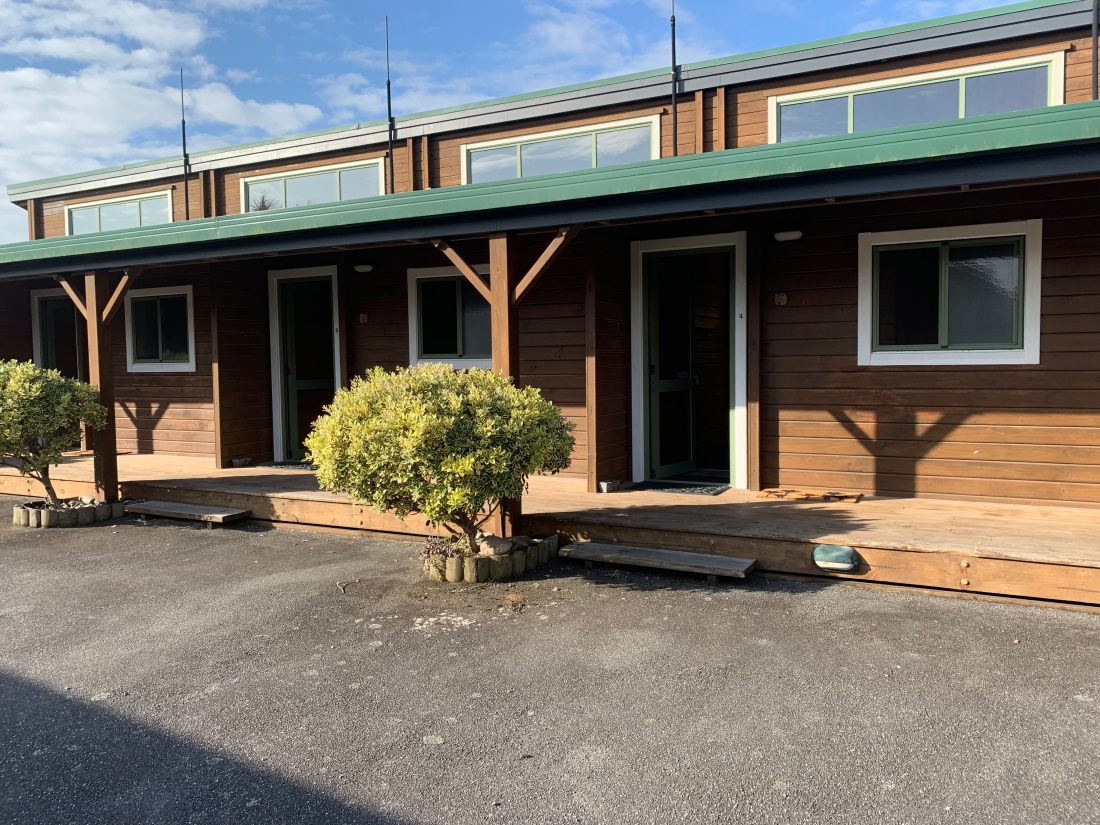 After much needed and appreciated showers and kisses, we went to eat.  Dinner was traditional fish and chips. When I tell you that every single plate was licked clean, I mean it. 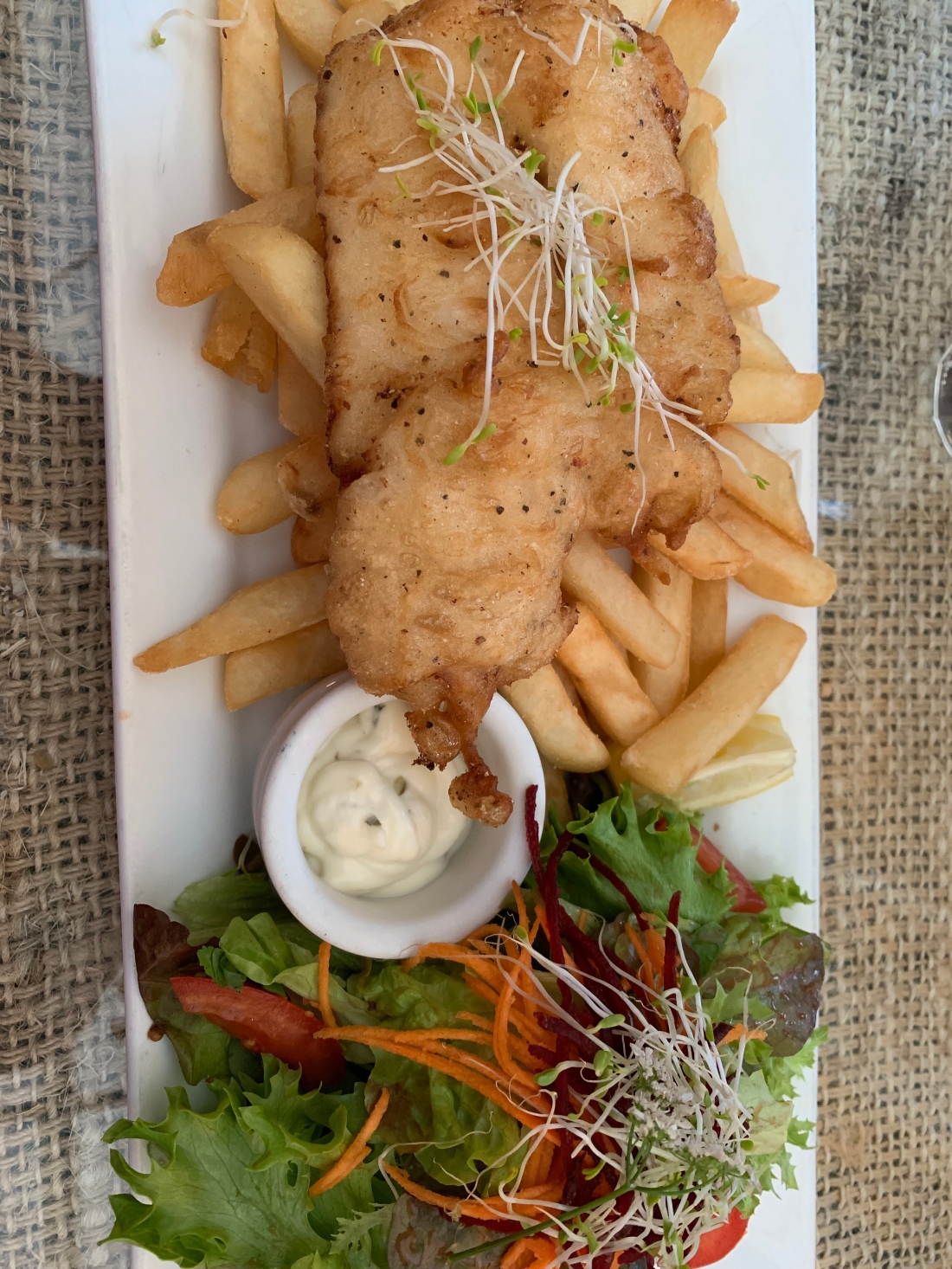 We walked across the street to do a nice walk through Pancake Rocks at sunset and to see the incredible blow holes.

We thought this sign was funny telling people not to climb over the fence. 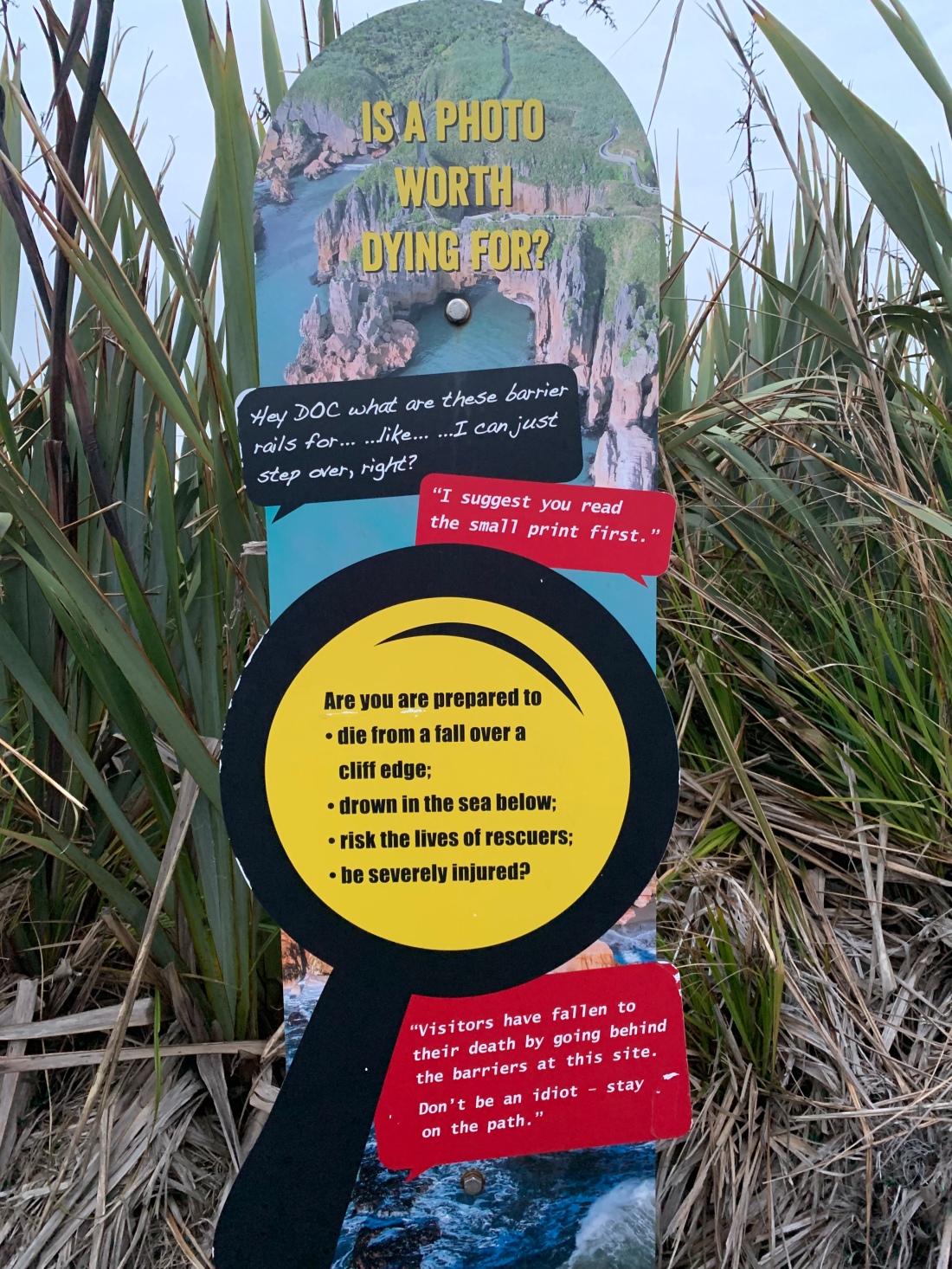 What idiots would do that??

The pancake rocks were interesting, flat rocks piled mysteriously high like a plate of pancakes. And the blow holes were incredible !

These were one of the most spectacular things I’ve ever seen. The violence of the water being smashed back and forth across the rocks was terrifying even from the safe viewpoint above.

“No matter how far humans come they will never compete with nature” said Kellen. And he’s right.

Dessert back at the cafe was fresh fruit. “Fresh fruit” sounds so much healthier than fruit piled with ice cream, whip cream and chocolate sauce.

Borut found the best shirt at the gift shop: Silence of the Lambs.  (By the way, Borut is pronounced baa (sheep) and root (carrot)

We got to see glow worms in a little cave-like gazebo below our cabin. They were so pretty! Like little stars all around us.

We all slept hard and were told to prepare for rain tomorrow.

Boob Goiter– see late paragraph entry “From Plan A to Plan B to Plan C”.  I marked the late addition with ***, sorry to make you go back but I think it’s worth it. You can get a chuckle at my expense.

I love to cook, especially soup, and bake challah. I ride horses, enjoy sarcastic people and am a food snob. I'm busy being mom to my two boys and I play mahj jong. View all posts by foodkibbitzer